Swansea’s The Arteries are a band who, since 2008’s eye-opening Blood, Sweat and Beers have somehow managed to maintain a simultaneously ubiquitous and elusive presence on contemporary UK punk rock. Their angular but fiercely melodic approach is one oft-attempted but seldom perfected like it is on this year’s Restless EP. Beginning with a plaintive, nagging arpeggio, the anticipation is masterfully built before an urgent release of melody and a deliciously rumbling bassline dominate the speakers in the form of opener “Bleed Away“. 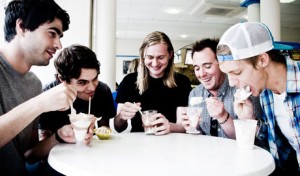 The immediate vocal delivery is breathtaking, and the track wields a vice-like grip dangerously close to Van Gogh-esque aural amputation. It’s brutally wonderful, and yet almost as soon as it really gets underway, it grinds to a yearning halt. Second track “Spare Ribs” quickly navigates in a different direction, its shanty-like swing lending a sense of old-world wisdom to an otherwise white-knuckle waterfall of melody. Although, again, it’s frustratingly concise. It’s not often that one will see a James Brown reference in a punk rock review, but the use of a primarily one-chord structure – with a simple, interspersed power chord hook – in third track “Die Nullte” is a technique often used to devastating effect by the former. A bold and effective move by a group whose genre traditionally uses the four-chord formula almost as a crutch. The tense and ominous opening chords to “Grow Up” bring to mind a more tuneful Nerve Agents. The throaty howl of a chorus that follows seems to go to great lengths to maintain this comparison but it’s a great deal more anthemic than anything Eric Ozenne ever wrote.

The penultimate “Somebody To Blame” is a chameleonic melting pot of aggressive Refused-like suspense and delicate Pixies-like dynamic awareness. The ear-catching lyric “between extremes” about halfway through seems to encapsulate the dichotomy to great effect. More challenging than the majority on offer here, but arguably more satisfying for it.

Climactic closer “Emotional Decay” begins deceptively harmoniously, but all too soon it descends into the aural equivalent of the desperate turmoil fearfully described in the lyrics. Despite the track’s jagged and cacophonic nature, it brings the proceedings appropriately to a close. All too soon, I’m pressing play again. Spectacular.