When they aren’t destroying venues and cementing themselves firmly in and around the Sheffield hardcore scenes. Revelations have been writing music and have used the beginnings of 2013 to produce their four track EP “Nothing Left.” 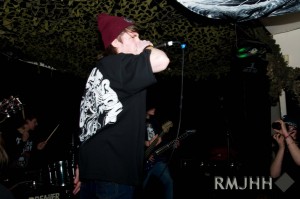 Recorded at local studios in their hometown of Chesterfield.Revelations have released four tracks of mayhem, and doom, using a mix of reverberated guitar parts and massive,down-tuned riffs to accompany howling vocals.As you can probably tell from this description, these boys are NOT your average hardcore outfit, and join the list of the new wave of hardcore/metal bands such as Desolated & Malevolence driving the scene into fresh directions.

Even from the first few notes of first tune ‘crossed paths’, it is evident that this offering is from your average hardcore demo or same-sounding metal effort. As the EP continues to play you start to notice things that make this band so much more than that. blast beats and palm muted chugging riffs combine to give a metallic edge to this record. What you have are four tracks of highly polished, brutal sounding mayhem, courtesy of the heavy xibalba-esque drop a# guitars& bass, impeccable double bass technique of drummer Ben and huge chugging breakdowns, and last but not least, daemonic vocals courtesy of front man Brad.

Completing the EP with a guest appereance from James Dexter (Demoriliser), this kind of music looks to be what hardcore is morphing into, however Revelations do not overlook their roots and there is definite hardcore influences, which set it apart from the sea of faux emotive metalcore Produced in the UK at the moment. Definitely one to watch.

For Fans of: Desolated, Malevolance