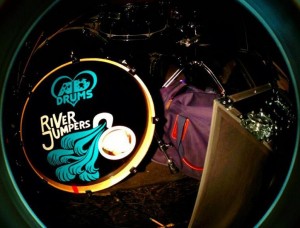 River Jumpers, a melodic punk rock band hailing from Brighton, U.K., have recently teamed up with the legendary producer Pete Miles (The King Blues, Failsafe, Sonic Boom Six, The Steal) to bring forth their debut full length Chapters. The band itself formed in late 2011 from the members of Chief, The Junk, and The Hotlines, all of which bring in their own various influences and experience. The band cite a range of influences from Kid Dynamite and None More Black to The Clash and Social Distortion.

Chapters churns out a series of anthems about life, love, politics and getting by, all the while reinforcing a positive outlook in the lyricism. The album unites its tracks with a writing and composition style that is ridden with so much heart-felt passion that it is next to impossible to ignore. The up-beat attitude and melody of the band’s breed of punk rock seemingly takes away any effort required to engage with the music, this allows the listener to jump straight in. Any fan of fast-paced and melodic punk rock will have their head bobbing to the energetic beats of songs such as the opening self-titled track Chapters. The many number of catchy hooks and lyrics that can be found throughout the album create an atmosphere of pop-punk allowing it to be easily accessible as a record. This quality is most exemplified by the track Five Doors Down, which includes a guest performance from Iona Cairns of Great Cynics, giving their audience every chance and reason to sing along. Even in the final track Strength of Ten with its slowing pace, the band manages to capture the spirit of the album, allowing their audience the opportunity to keep bouncing and singing along to the close.

With this release, the band have cut themselves a River Jumpers shaped hole into the fabric of U.K. music scene and are throwing themselves out there to fill that gap. This is made all the more impressive since at the time of recording, the band had been together for only about a year. With an upcoming Euro tour alongside Ducking Punches in February, and U.K. tour dates in support of Bad Ideas in late April leading into mid-March, make sure to go out and catch them.

If you like River Jumpers you will like: Bangers, Above Them, How Dare You, and The Arteries.