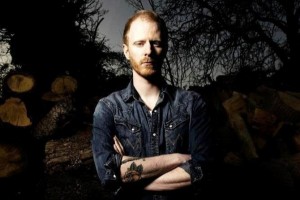 Storm is the debut full length bought to us by Haverhill’s Sam Russo. If you haven’t been following the rise of the British acoustic folk/punk scene then look no further than “Storm” for your belated introduction. Packed with all the down trodden metaphors, tales of communal drinking, victory and loss that we have in seen the likes of Frank Turner, Dan Andriano and Dave Hause, Russo hits the nail on the head, hard.

The album kicks off with “Factory Rain” a song about hard work, little sleep and no play and it has a massive Bruce Springsteen feel to it actually, especially with the line “This ain’t Rio Bravo and I’m not John Wayne.”

Track two “Holding on” is a desperate anecdote about keeping friendships alive through the monotonous weeks by clutching to the precious weekend and not letting go (which is actually the title to track three) until it is torn away from you at the very last possible moment.

Further on we hear “Cold Feet” in our ears, this track really pulls on the heart strings, with the opening line “You dropped your cigarette into my coffee cup, and you picked up your purse and said I guess that’s that” you already know Russo and his lover have a volatile relationship. The song ticks all the boxes, the screaming and the punching of walls that turns to a lonely sleepless night. Sam catches the feeling of a brake up beautifully.

“Storm” really is a grower and there is no doubt that all these songs are well written, thought about stories with all the questions and resolve a young man armed with a guitar and a few beers should have and by the third listen you will feel like you have known Sam for years.

It is mostly an acoustic guitar and Russo’s voice that carry “Storm” but when the percussion and occasional lead guitar hook does kick in it adds just enough to get your heart beating and your feet moving especially in what is our favourite track “Tinned Peaches” Sam Russo‘s “Storm” really is a must have for fans of acoustic led music soaked in desperation, love and friendship.

If you like Sam Russo check out: Ducking Punches