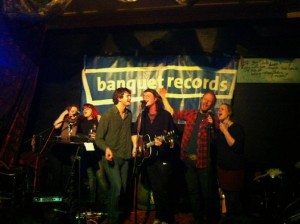 The Darlington Sessions #1 marks the first batch of acoustic recordings to emanate from the newly founded Darlington Road Studio, started by none other than You, Me & The Atom Bomb’s Tim Greaves and acoustic folk/punk songstress El Morgan. This release, which attempts to be the first of a series from the studio, features 9 well-crafted, acoustic driven songs from some of the best and well-loved names in the UK punk scene; Roo Pescod (Bangers), Giles Bidder (Great Cynics) and Kelly Kemp (ex-No Comply).

Rather than being a compilation of solo songs written by each individual artist and slapped onto tape side-by-side with little or no fluency, this record skips the Sunday roast dinner format (something we all love, but may consume a little too often) and instead offers the finished product of a weekend in the studio where each artist’s penciled melodies and penned chords were built upon as a collective that centered around friendship and good-times.

Bangers’ front man Roo Pescod kicks off the record with hard-hitting opener ‘Bedtimes’, a song about love and the tests that a relationship can bring.  The collaborative song writing is obvious from the get-go and albeit Roo being the only songwriter that is debuting their acoustic material, he does not disappoint. His gravelly and gritty vocal that is prominent with Bangers transfers well here, although die-hard fans of the trio’s style may struggle to feel at home with his songs on the split at first, as the infamous Bangers timbre is left merely poking through the surface of the material, rather than skating on top.

Giles is the least contributing to the record in terms of track-count, but his influence and powerfully uplifting vocals are buried deep into the record and flow throughout.  Those looking for another batch of solo acoustic tracks that will effectively become full-band album tracks for Great Cynics in the future may well be disheartened as these songs develop their own individual and character that might feel forced if they were transposed and added to a Great Cynics release.  That being said, it doesn’t mean fans of Giles’ full-band work will not love his songs here.  ‘To Find It On Your Own’ is a passionate and personal document that discusses the aid that taking yourself away from everything every now and then can give you – blending Bidder’s classic style and sound with the accompaniment of Kemp’s empowering harmonies to further reinforce the collaborative nature of the record.

Whilst Kelly Kemp’s unique and stunning melodies are scattered, yet perfectly placed across all of the 9 tracks, her own efforts bring enough diversity to the songs without letting them lose their eloquence.  Her socially aware and catchy lyrics combined with her feel-good songwriting offer a perfect and slightly more relaxed dynamic to the record.

Roo Pescod’s ‘Under the Table’ is the only questionable song in sight. Whilst some may relish in the downbeat tempo and sliding, scratchy bass-line that guides the track from beginning to end, others may feel that the song sends the finale of the record off on a path so different to the others that they are screaming for it to come back.  Either way, there is no denying that The Darlington Sessions #1 that everyone should lend their ears to.

Out now on BandCamp via Cats, Aye! Records