I’ve seen this record in the Specialist Subject distro for ages now. I mean I have no real concept of time passing but it feels like almost a year that Andrew’s been telling me to listen to it and I’ve been sporadically holding the 12 inch in my hands looking at the gloriously sci-fi artwork thinking that I’d like to. I always enjoy a good sci-fi album cover, and the bold yellow/red/black of this really does talk a good game for vinyl releases. The Real Danger are from Rotterdam in The Netherlands and have been a band since 2006. Shield Recordings who released the record are excellent and always worth checking out. 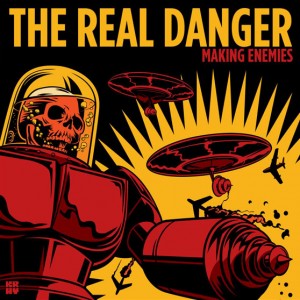 Musically the band are pretty straightforward poppy pop punk, sounding  much like The Ergs if they were less idiosyncratic, so maybe with more in common with The Loved Ones. Mostly mid-paced, not too energetic pop songs with fairly predictable, uninspiring lyrics “walking down the same road I must have walked a thousand times before, I can’t take this anymore” which would be less forgivable if the band weren’t singing in a second language. There’s nothing here that makes me squirm, and I’m quite the squirmer when it comes to bad lyrics.

In fact everything is very well executed, and there’s some guitar licks and mini solos which are really cool in a genre way. There’s a little Hot Water Music vocal homage in Rewind and Erase which made me smile. Covering Superchunk (Skip steps 1&3) on an album seems kind of weird, but it sounds pretty good so it doesn’t really matter.

The truth is that I’ve always been a sucker for this kind of clean, well-produced, well-versed pop punk, and The Real Danger honestly do it as well as anyone. Making Enemies would make a great soundtrack to sit on the sofa and read a book to after work. It would help you remember that there is a whole world of bands playing this kind of punk music, which personally always makes me feel kind of safe and secure.

The album ends without a big flourish, and I can easily picture it spinning with the needle in the middle groove for a while until I get up for a cup of tea, replace it with Lit’s A Place in the Sun,  and return to my world of science fiction reasonably undisturbed.

In conclusion; everybody needs a few records that sound like this, and The Real Danger easily hold their own. The art is great, the songs are well realized, and by the end of the album the only hook stuck in my head was written by Mac McCaughan.

For Fans of: The Loved Ones, The Ergs