REVIEW: The Front Bottoms – Talon Of The Hawk

REVIEW: The Front Bottoms – Talon Of The Hawk

There is a lot riding on this album for New Jersey acoustic-punk rockers The Front Bottoms. For a band now on their 4th album, they are relatively unknown in the UK, possibly because Talon of the Hawk is only the band’s second studio-produced and label-released album, meaning their exposure has been fairly limited until now. But with a UK headline tour this September, the band are hedging their bets that the time is now for them to break the UK. 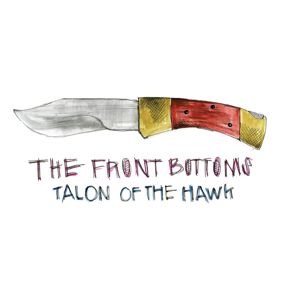 Opening track ‘Au Revoir (Adios)’ is a catchy and pleasing opener that speeds through at just one minute forty eight seconds long, exposing the bands punk roots. However, as the song hits its crescendo, something fairly mundane, yet definitely mentionable happens. Some overdriven electric guitar, thick backing vocals, and a load of additional instrumentation now slips into the mix. This somewhat saturates and drowns the acoustic-led sound that the band have always had, and that has been a major attraction for many listeners of recent years. At the end of the day, these new elements all come down to ‘better’ production of the album in comparison to previous material and whilst this will clearly make no difference to new listeners of the band, it does distract somewhat for established listeners.

‘Skeleton’ and ‘Swear to God the Devil Made Me Do It’ are instant hits and fantastic examples of why this band are as popular as they are over in the states. These songs are catchy, memorable and great for dancing to! This continues throughout, and riff after riff and chorus’ so catchy you might want to get a screening down the clinic, make the first half of this album feel well executed and above all, consistently fun! However, after the 6th track, it sags a little and begins to feel as if the band made some more music just to fill the track listing. They are quite uninteresting and generally very mediocre in feel – a large detraction from the thick rich song writing that starts the album off so well.

Lyrically, the album is fantastically varied. Vocalist and guitarist Brian Sella somehow manages to cover every thematic base in some way. From the light hearted “I’m sure that we can find something for you do on stage. Maybe shake a tambourine?” in ‘Twin Sized Mattress’, all the way to the darker and more personal “I wanna be stronger than your Dad was for your Mom” in ‘Santa Monica’. Sella’s lyrics jump around from subject to subject, but always weaving tantalizing fragments of narrative that you can interpret and project your own meaning onto, making listening to their music feel very immersive and intimate at times. Sadly, these lyrics are delivered without The Front Bottom’s usual erratic and creative vocal melodies, making them easier to sing along to, but subtracting just a little more from the sound this band used to own so well.

If you approach this album subjectively as a standalone collection of songs, then it’s great. It’s still a shame that this album fizzles out half way, but the amount of repeats you will get out of the first six tracks makes up for this fact. If you add in the context of the band’s existing material, then you need to get over the changes in sound and prepare to be a little disappointed. Talon of the Hawk doesn’t quite fulfill the expectations that their last album left us with and sees a slightly unwelcome departure from the sound that used to make this band so unique.