REVIEW: The Departed – Steal The Crown

REVIEW: The Departed – Steal The Crown

Hailing from the modest town of Grimsby, in the burrows of North East England, comes a group whose name should be on the lips of many already, especially after sharing the stage with stalwarts of hardcore like Terror, Pay No Respect & Dead Swans. It has been a busy few years for The Departed, who are not content with just selling records within these shores alone. It has been a while since these boys have released anything and with 2010’s ‘Remnants 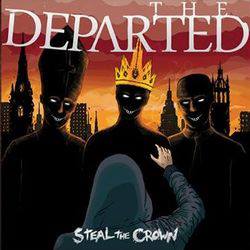 ‘ having earned a 9/10 from Rocksound Magazine, it’s a follow up that has been highly anticipated.

As soon as the spoken word sample and clean guitar introduction in ‘Prelude‘ cease, the album catapults into a full frontal, yet slightly generic metalcore assault, with second track ‘Faithless‘ being a stand out for fans of hardcore esque music, with enough two step rhythms and distortion fuelled ringing to get any venue moving.

‘Steal the Crown’ then moves through the motions, with the band mixing straight up, fast and furious metallic hardcore with clean vocals and gang chants in tunes such as “All for Nothing” and ‘Tides‘ creating a catchy and enjoyable yet somewhat formidable atmosphere. However the album also features slower feels and highly emotional grooves, as in the beginning of track 7 ‘Taking The Time To Take What’s Mine‘ which then follows suit and turns into another thrash-fuelled hardcore number.

An unexpected bonus is the guest vocals in penultimate track ‘Hopes & Expectations’ which comes in just at the right time, injecting the track with just enough heaviness and brawn to make it my personal favourite on the album. The title track then closes the record with a lionheart-esque power chord frenzy complimented perfectly by the solid and well record drums.

Personally, as a fan of more traditional strains of hardcore and a guy who strongly avoids the host of UK metal bands who call themselves ‘Melodic hardcore‘, I was pleasantly surprised by this release, despite featuring the samey vocals used by many bands, The Departed just seem to work where other records similarly do not, and as a result it is an enjoyable album to listen too and definitely not to be tarred by the same brush as other UK bands who set out to deliver a similar sound. It’s not going to change the world and it sounds a lot like ‘Golden Age era‘ Your Demise but that doesn’t stop it being massively catchy, aggressive and entertaining. A solid album by all means.