2003 was a good year for pop punk.  Nowadays the genre seems to have changed but back in the early 2000’s, pop punk was in its hey-day.  Blink 182 had reformed, Sum 41, Goldfinger and Good Charlotte were all at the height of their popularity, and Yellowcard had released their breakthrough album – Ocean Avenue.  Now, ten years after its original release, the band have reworked, revamped, re-recorded and re-energised that album, leading to the release of Ocean Avenue Acoustic. 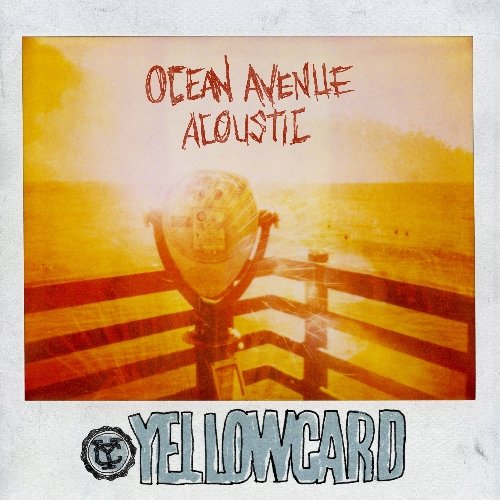 Ironically then that the first track is called ‘Way Away’, as that is exactly what it is – a complete new take on the original track.  The violin seems much more prominent than it was on the unplugged version, something that adds to the originality of the band.  The track has much more of a chilled out feel to it, but the use of a full drum kit keeps a subtle hint of the power that is heard in the plugged in version.

The title track, ‘Ocean Avenue’ is probably Yellowcard’s most famous song to date, with numerous appearances on MTV, Kerrang and Scuzz, as well as substantial airplay, this track was a must have in a 2003 summer playlist.  Ten years later in 2013, it should still be there. Old fans are able to re-live their youth, minds transported back to days on the beach and road trips in the sun, where new listeners can also do the same with the unplugged version.

The transition from the upbeat ‘Ocean Avenue’ to the slow and melancholy ‘Empty Apartment’ can come as a bit of a shock at first, but soon establishes itself as a welcome breather in the course of the album. The violin solo in the middle really does add to the feel of the song, which would be in danger of sounding thin without it.  ‘Miles Apart’ is a great contracts to this, starting with a drum solo and palm- muted verses, it’s a true transition from punk to acoustic, again, with great work from violinist Sean Mackin.  The following track, ‘Twenty Three’ is the only track in the band’s history where Mackin provides lead vocals, a subtle but noticeable change and no mean feat considering his battle with thyroid cancer.

Overall, this album is what all acoustic albums should be.  If works as a stepping stone for new fans to discover the band, as well as something for die-hard fans to re-discover why they listen to them in the first place.  The violin really works with the unplugged feel, creating a new sound that’s 10 years old.

For fans of: Story of the Year, All Time Low, Anberlin