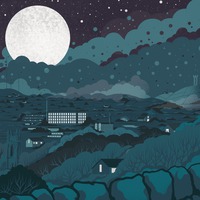 I feel a bit out of my depth with this one. When I first got hold of this 12inch I was expecting a relatively stripped down acoustic record with ‘the Ghosts’ providing a spattering of extra noises, but before I’d even got it home I saw them play at Out Of Spite and realised that my preconceptions were way out. Jimmy Islip & The Ghosts are most definitely a rock band.

Previously I’d watched Jimmy play acoustic guitar on his own, and listened to his songs on the Chuck Ragan/Sam Russo/Helen Chambers 12inch. I’ve also seen him in Milloy, That Fucking Tank, The Magnificent, and known him through his hosting of Out Of Spite. In fact Jimmy’s reputation as a prolific force in the UK punk rock scene is well deserved and hard earned. And as anyone who has seen any of those bands will testify to, whether he’s playing drums or guitar or singing, Jimmy’s always pristine.

Jimmy Islip & The Ghosts is certainly no different. Coming across live as a pretty good Bruce Springsteen-esque rock band, complete with sax and keyboards, I found myself thinking that this was a band that the wider world could enjoy. The Ghosts are certainly very slick and accessible (this is traditionally where my blinkers come down) and professional and they created a noise loud enough to rock along to. But the record is what really shines to me, and after all it’s the record that I’m reviewing.

The Wild West Riding isn’t such a big rock spectacle; it is listenable country rock with a lot of different dynamics. The rock is there, but at a living room volume it’s easier to appreciate how well-crafted and nicely layered it is. There’s also a few quieter songs with just an acoustic/voice and one very pretty tune on the piano. These are distributed amongst the rock numbers fairly effortlessly and the whole record moves along at a good pace and never feels strained or slow. I guess the crafting of the record is really traditional, and that’s something that I dig about it. A bit of rock, a bit of quiet, a couple of covers, a few guest vocals. It’s wholesome and traditional and your parents would probably approve.

In conclusion it’s a really easy, enjoyable record to have on. My girlfriend likes it. Jimmy tells a good story or two about a range of rogues and innocents. I’ve listened to it twice just sitting here and I’ve enjoyed it immensely, but as I said, I feel slightly out of my depth trying to review it. Because I don’t know shit about country rock, and The Wild Went Riding is probably the nearest thing to a country record that I’ll ever own.

Go and see them play and make up your own mind, and take it from me that the record is worth listening to. Buy it from All In Vinyl if you can’t get it live, as they put it out and did a super job.