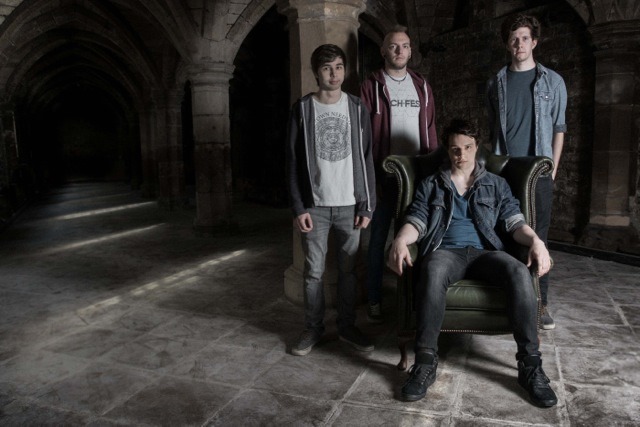 Post-hardcore heavyweights Heights will headline Crash Doubt’s new pop-punk and Hardcore club night at The Engine Shed on 29th November with our DJ’s spinning the heaviest tunes till 2pm. We have a three great support bands opening for them and we’ll be profiling each one this week as we build up to the event. Tickets can be picked up here.

Crash Doubt: Borders are relatively new to the Lincoln music scene, tell us a little about yourselves?

Borders: You are correct, we are a new band/project in Lincoln, we are all however, very familiarised with the local scene and each member has been in and out of previous projects around the local area. We all agree this is the strongest line-up of members we’ve worked with before and want to really take this one as far as we can throw it.

Crash Doubt: Which artists would you say heavily influence you?

Borders: We recognize that finding a target audience for a band is very important, but we admittedly haven’t aimed for a specific genre. We all have strong individual influences within ‘heavy music,’ but there’s so many different categories a ‘heavy band’ falls under now-a-days, hardcore, metalcore, djent, etc. Within our band we have a mix of tastes and believe that shows through.

Borders: The opportunity we we’re given by Crash Doubt to play with TRC was unexpected to say the least! Not to imply we have little faith in ourselves, but to get put on such an awesome show when we’re a reasonably new band was incredible. We assume we didn’t disappoint, being put on the bill with ‘Heights’ shortly after ‘TRC’ must mean we’ve made an impression, right? We’re stoked to play this show and can’t wait to show Lincoln what we can do!

Crash Doubt: Tell us a little about Origin….

Borders: We are releasing our first official 4 track EP ‘Origin’ on the 5th December 2013, originally we intended to mix it all ourselves, like we had our demo track ‘Wolves,’ but instead we got a producer and friend of ours, Andy Kettle, to produce our stuff, he’s an incredible producer and it would be worth checking him out if you’re in a band in the need of some top quality recordings. We think this EP explains what we mean when saying we have broad influences; it’s definitely worth checking out!

Crash Doubt: A lot of bands have a long-term vision and want music to be their career, do you fit in that category or do you all have ambitions and goals outside of playing loud music to angry teenagers?

Borders:  We can recognize that the music industry has more underground acts now than ever before, it’s tough to see so much talent not get recognised, if you want to get anywhere, you need to really want it.

We all agree, after each having gone through previous projects to find this band, this is the one that needs pushing because it has potential. For a band that’s new on the scene, we’re doing reasonably well at making ourselves known, if we can follow this band as a career path, which would be more than incredible.

Thanks Borders! Head over to our Facebook page to keep up to date with all our shows!