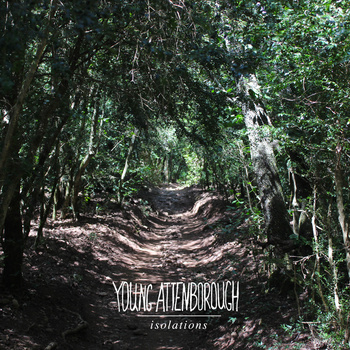 I’ve always liked Young Attenborough. Before I even knew who they were I liked the name, and then one evening at The Windmill in Brixton I realised that I already knew them all and simultaneously that they were a pretty decent band. In fact I believe I have all of their records, including a pink demo tape from 2011 with a bear pressing a cafetiere on the cover.

Isolations is their new album which as well as being released on CD is available to download for free from http://youngattenborough.bandcamp.com which I heartily recommend.

Their BandCamp describe Young Attenborough as “poppy indie punk” which is a fair description, but personally I’d add “scrappy” to the list as, like previous releases, there is certainly a slightly scrappy feeling to the record. It’s something about the mostly-in-tune indie-punk vocals, and the mostly-in-time recordings which is endearing rather than distracting.

So my first impression about the album is that Murf’s guitar playing is really great, as well as a lot of cool lead and ambient twiddles, the actual riffs are generally interesting and intricate. It’s really varied through the span of the album too which keeps it exciting and refreshing. Good work.

In fact the variation on the album is it’s strongest point, there’s a lot of quiet moments, plenty of fun indie-rocking bits, and some faster thrashy bits. There’s definitely some reminiscence of older Apologies, I Have None at times in the vocals and phrasing, but the predominant vibe I get is of an indie-rocked 90’s emo band. Maybe I’m just hearing what I want to hear. The chorus of Little Bit of Unease actually sounds like Weezer, and is followed up with a cool slightly discordant instrumental section. Everything knits together really well and the album is certainly never boring.

Lyrically Isolations is peppered with introverted worries and worldly dissatisfactions, as well as 4 songs called Sadness In The Family I-IV which seems to hint that someone had a bad year. There seems to be a pervading feeling of guilt throughout which I dig. I have no lyrical complaints here at all except that thematically one song more or less blurs into another.

To conclude, the album is interesting, musically accomplished and very listenable. In fact if everyone in the UK could just steal some of those riffs and ideas I think we’d all benefit. Go and donate a couple of pounds and download it at once.

Note: I just had a look on Young Attenborough’s tumblr and discovered that they released 18 lilac cassette tapes of a single from this album, so I don’t have all of their records. The bitter little part of me hopes that they threw at least half of them off a bridge to make absolutely sure that people didn’t listen to them.