Imprint #6: An interview with Andrew Horne of Specialist Subject records

Imprint #6: An interview with Andrew Horne of Specialist Subject records

Quickly making a name for themselves within the UK punk scene, Specialist Subject have been around, in some form, for nearly 8 years now. Having released records by staples of the UK scene such as CAVES, BANGERS and THE ARTERIES, as well as trying their hand at pop-up record stores, the future seems healthy for the label. We spoke with label boss Andrew Horne to find out more.

How did Specialist Subject come about?

Well the first release was about 7 years ago, I was doing a degree in Music Technology and as part of the course me and a mate decided to start a band, record and put out a 7″. The band was called Magnus Magnusson (like the Master Mind presenter) so Specialist Subject Records seemed a natural name for this release we were doing. It was never really meant to be any more than that, 2 years later I’d started playing in Bangers we were self releasing stuff so it just made sense to resurrect the name and it progressed from there.

What it is like releasing your own bands (Bangers*) records, compared to a band that you are not linked too?

It’s got it’s good and bad sides, it’s great to be able to do things completely on your own terms. We’re actually working on a Bangers release at the moment that I wouldn’t dream of asking another label to release, it’s pretty stupid. So it’s cool to have a platform for that.

But on the other hand it really sucks to be trying to promote your own band, saying to someone “check out my band” is very lame and automatically seems amateur. I’m way more comfortable promoting other bands and being able to say objectively “this band is great, listen to them”.

Did you take any inspiration from other labels when starting out?

I grew up massively into the whole Epitaph, Fat Wreck thing so that probably shaped the way I view record labels. Being in a band releasing your own records and those of your peers just seems like a completely natural thing. I’m a big fan of Jade Tree, I love how varied their releases are but the standard of everything is so high. I got a tweet from them the other day about there being a new Challenger album on the way, I think I was a little starstruck!

For about 2 years between the first and second releases on Specialist Subject I also worked at a Classical record label & distributor so I think that’s influenced me a lot, that really taught me how you go about running a “real” record label, some of which I’ve definitely chosen to ignore,

I know when I started Cats? Aye! I often emailed you asking for various tips, contacts etc did you ever find yourself doing the same, or has running a label come naturally?

It’s come pretty naturally I guess, the place I get 90% of our releases pressed now is the same company I used to press my first bands, first CD when I was about 17. Playing in bands, learning how to produce music, working at another label have all taught me little bits along the way. The thing about the music industry is everything’s changing so quickly there’s not really a correct way to do anything anymore, the function of a record label is becoming so vague, I guess the important thing is being confident enough to take risks, try new things, its a constant learning process.

For me, the most interesting SS release is the split between Kelly Kemp & Bangers and El Morgan & The Arteries. Tell us how you managed to bring that to life?

Well that was all Kelly Kemp’s idea, she had a couple of songs that she really wanted to be played with a full band so she asked Bangers to back her up, somehow we roped El Morgan in the Arteries into doing it too. It was really fun, she just sent us some rough demos, we went and recorded the backing tracks and she turned up just in time to sing on them, don’t think she’d even heard our interpretation before that!

El and The Arteries side turned out awesome, especially considering they recorded the whole thing aftermidnight. There was a slight communication error with Pete Miles who produced it, when they arrived at his studio in Devon to start recording he was in Brighton! He drove straight back to Devon and recorded them over night.

Do you ever see SS as being more than a ‘spare-bedroom’ label?**

Well at the moment it kind of is, I actually moved the label into a proper office in April! Was getting sick of not having enough time to work on the label and being so disorganised at home that everything took twice as long anyway, had a real dilemma whether to stop doing Specialist Subject all together or change things so I could actually make it a priority. So I quit my full time job, found a better part time job, found the cheapest office I could find and started working on some other projects which will hopefully pay the bills and afford me enough time to give the label the attention it needs. 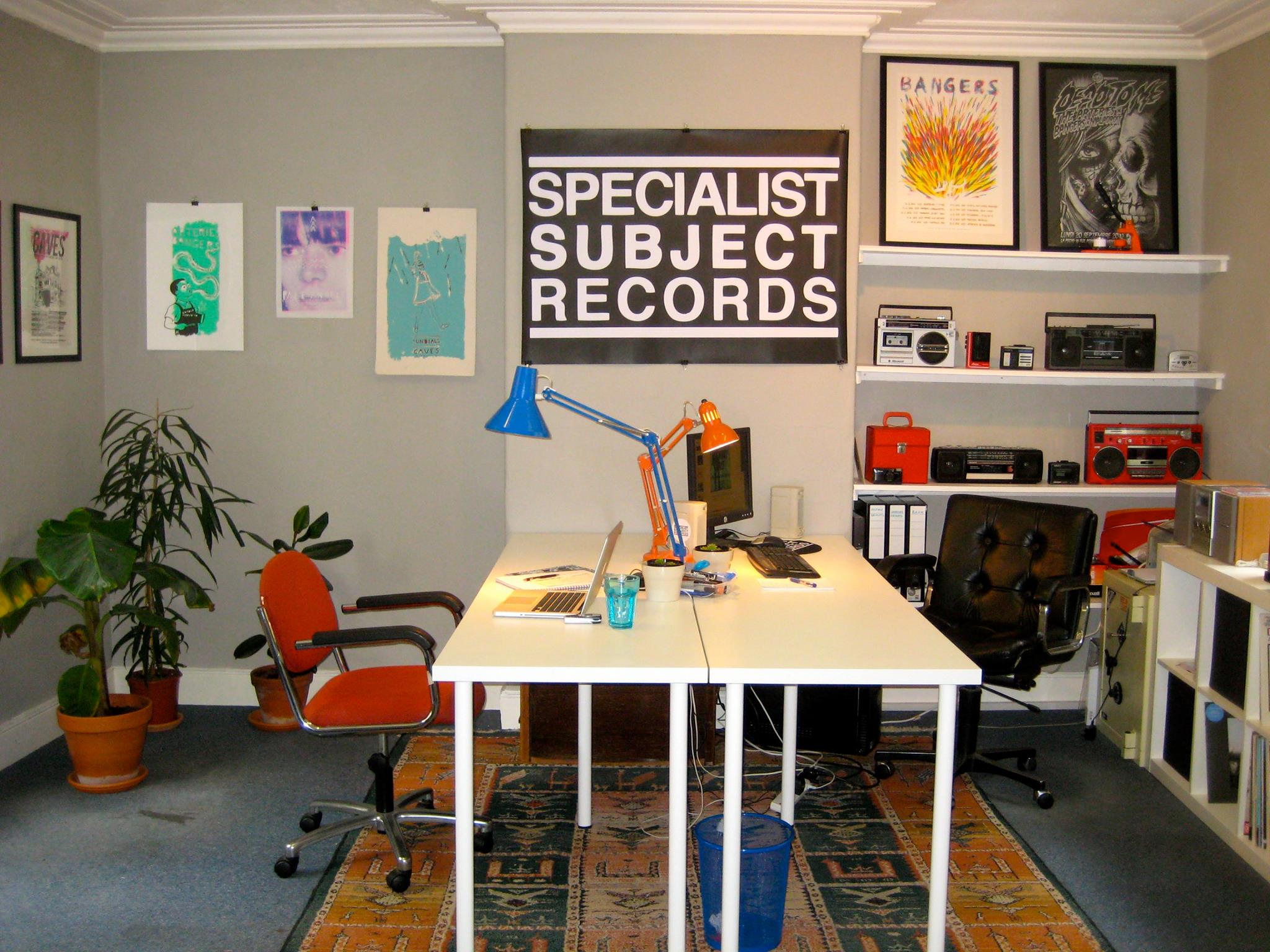 Time will tell how that works out. If the real question is do you see Specialist Subject making any money then I’m not so sure!

Do yo work to any rules when deciding to work with a band/artist, or is it all down to how they sound?

My only real rule is that I’m enthusiastic about it, I’m flexible about pretty much everything else. I’m not too concerened about how I think it will sell, no one’s getting rich of this shit and life’s too short to spend my time working on things I don’t care about. I’ve kind of built myself a niche of working with UK based artists so I’d probably have to be even more enthusiastic to do releases for bands from abroad but I won’t rule it out.

Being active in both label and band, how do you see UK punk in 2014?

I think punk in 2014 is as healthy as it ever was, there’s always been good people and bands doing good things and that hasn’t changed. It’s nice to see people challenging the status quo, too often punk rock is just a re-hashing of the same ideas and presenting them in an increasingly safe way. To be honest I can get pretty jaded at times but then I’ll discover a new band who will completely blow me away and restore my faith, as long as that continues to happen then I’m happy!

If you had to pick one SS release to take with you for tour van listening, what would you go for?

Probably the new Fairweather Band EP, it’s great and it’s not out yet so I haven’t already played it to death!

If the label ended tomorrow, what is the one thing you’d miss?

I’d definitely miss the joy of getting a new record back from the plant, I won’t miss the simultaneous fear that I’ve missed a spelling mistake or sent the wrong master!

You recently ran a small ‘pop-up’ record store, how did that turn out? 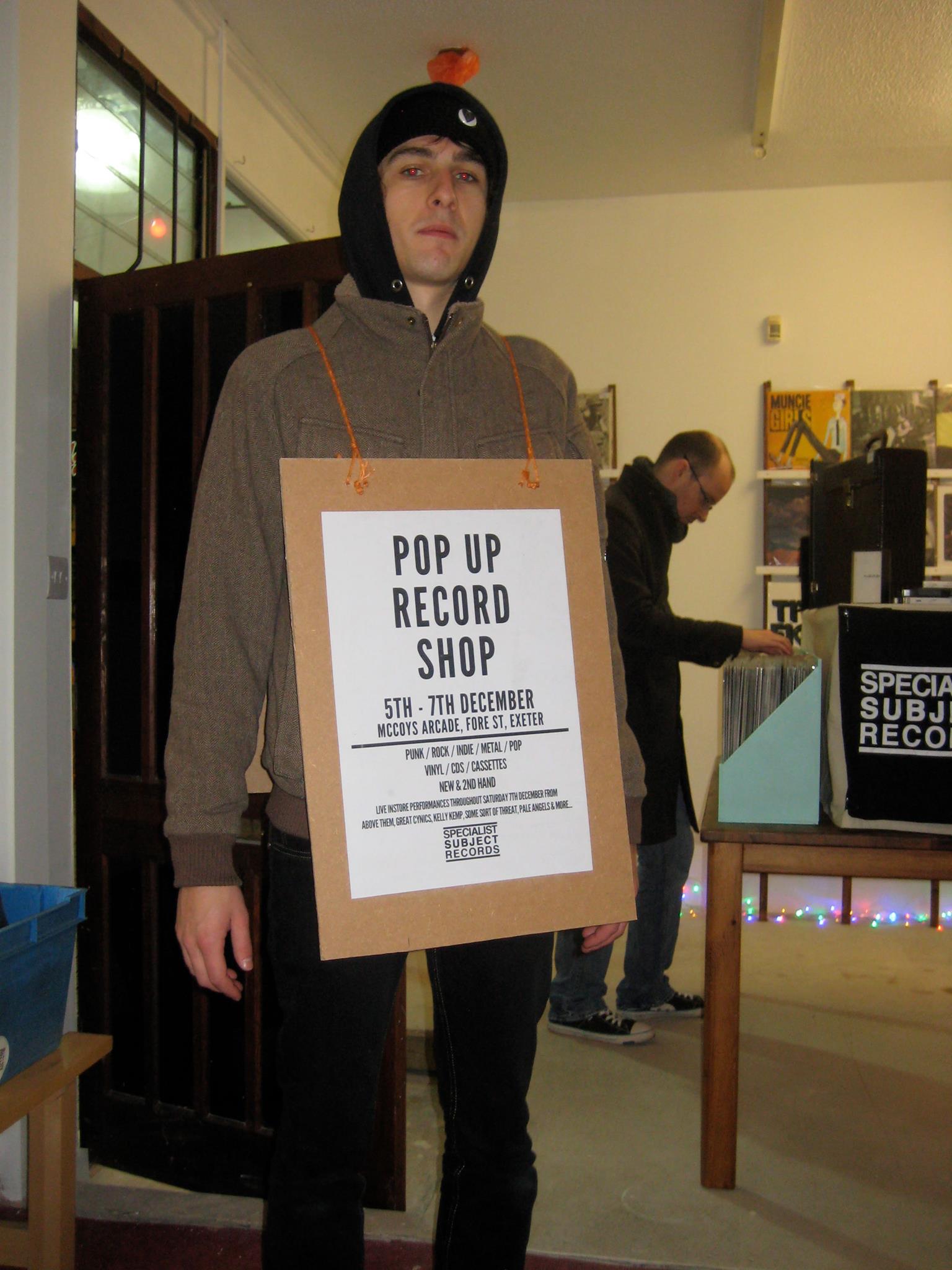 The pop up shop thing came about because Mark Young (from Above Them) kept on going on about how he wanted to start a record shop, at first I told him it was a terrible idea. Then after a while I though “fuck it, let just do it” at least on a temporary basis. So for about 6 months last year we started getting stock together, found a small shop unit that the landlord kindly let us use for free and we set up a small shop which opened for 3 days in December.

On the Saturday we had a load of acoustic in stores, loads of people came out, bought records, chatted about music and it was just very cool. I remember a man probably in his 50s watching Pale Angels play a quiet set with his wife and child, he absolutely loved it and straight after the set bought their LP. Having the physical presence of the shop really helped to get music out to a wider audience and it’s great to think of the label as being more than just this thing that exists online and in the pile of boxes I have sat in the corner.

I’m hoping it will be something we repeat again this December but we’ll see.

What does the future have in store for the label?

The next 6 months are probably going to be the busiest ever, got a new 7″ from Pale Angels out next month, Big Wow LP, collection LP for Doe, Fairweather Band 12″ probably a couple of others, got the first ever “Specialist Subject Tour” in October with Bangers, Pale Angels & Doe doing 6 dates together in the UK, starting to think about maybe doing another pop up shop this December like we did last year. Basically trying to do as many projects as time and funds will allow!