Imprint #8: An interview with Ricky Bates of Wrongwayround Promotions

Imprint #8: An interview with Ricky Bates of Wrongwayround Promotions

The Imprint series so far has focused on the people behind the record labels, for this issue we decided to take a step into the world of the promoter, the people responsible for giving your favourite bands a place to play, and people to play too. Ricky Bates brings bands into Southampton under the guise of Wrongwayround Promotions, a D.I.Y set-up that isn’t afraid to play with the big boys. We wanted to know more about what goes into bringing these shows to life: 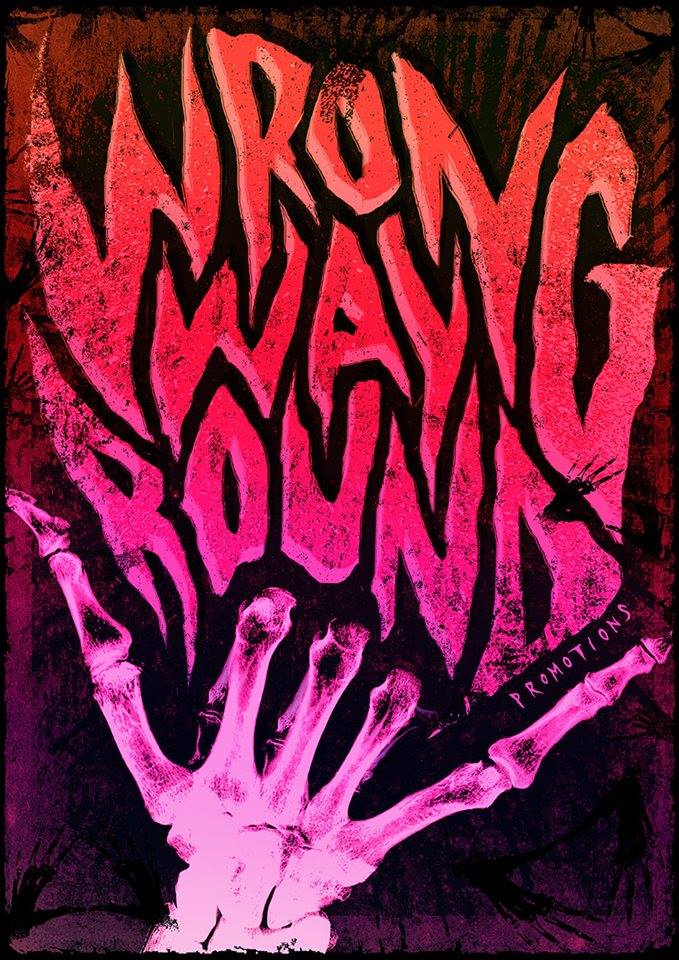 How did you end up putting your first show on, what was it about that first show that made you want to do more?

The first show I ever did was in my house in my 3rd year of University, did a few of those here or there with bands like you me and the atom bomb, don ramos players, Our Time Down Here etc then the 1st one in a ‘venue’ was with Chillerton as part of a charity show for my course at said Uni.

I suppose just the idea of having fun and going to a show in a different surrounding with the bands YOU want to see so I suppose it’s very self indulgent in a way, no rules, cheaper booze especially when you’re broke and can just have 40 friends in a ‘party’ vibe.

Then carrying those aesthetics to a live show in a venue or DIY space has always been a challenge but I believe I’ve managed to do it or I probably wouldn’t still be doing shows today.

You’ve put on the smallest bands the scene has to offer, as well as the biggest, is there a noticeable difference in how the shows run, depending on the ‘size’ of the band?

Sure well doing tiny shows with 25 people then doing shows with 400+ people there’s a massive jump in every element not just financially, essentially you have to sit down months ahead and weigh up everything that could go wrong and make sure its covered in advance. Promoting is a huge educational process if you don’t make mistakes you’ll never learn and to do ‘it’ better the next time and that’s the beauty of it, that ‘anything can happen’ feel.

For bigger shows from the ground up you have to approach everything with a business mentally as non ’DIY’ as that may sound it’s not cool or ‘scene’ to lose £100’s of pounds on a show because you wouldn’t have paid that much to see the band in the first place, be clever be aware of your audience in your town, don’t be afraid to say no to putting on shows.

The differences are huge, from cars and vans to giant sleeper buses holding 13+ people and a trailer, the logistics for starters of both are miles apart so you need to be prepared for a TM to get up your ass about everything and have a answer, that’s before you even compare the ‘rider’ difference!  ha ! from £20 at a DIY show to £250 on a big U.S tour package.

What do you look for in a venue that makes you feel comfortable using them for shows?

Trust is the main thing for me overall, security can’t be ‘club security’ because they’re always more aggressive for starters and ‘don’t get it’ so steer clear from them.

Sound and engineer, who are they? What bands have they done before?

I don’t want some jobber mixing an epic band from the other side of the world, I want it to be spot on and have the crowd appreciate it as the bands do also for on stage sound, again it’s about being educated in every element of promoting not just ‘putting on a gig’.

Hire fee being reasonable, layout of the room, beer prices and staff being cool and friendly just things I know ‘my crowd’ would appreciate really.

Is putting on shows a viable career option, something the kids could aspire too?

100% no not at all, unless you work for a in house for a venue booking or work for a commercial national promotion such as Live Nation, SJM, AEG etc.

I would say just aspire to put on the bands you love and have a wish-list and if you can achieve even 50% of that then you’ve done something special at least on a personal level.

Most the bigger independent promoters I know also have full time jobs, the risk is far too great financially unless you are sat on a pile of money of course.

When I put on a show, I worry about it for days beforehand, I am always convinced no one will come, do the nerves get you at all?

I get nervous the night before a show if it’s a big show and I stand to lose thousands of pounds I don’t have, but nowadays it’s less and less really.

When no one shows up to a show you have spent hours of your own time for free promoting I don’t think there is anything more disheartening, it’s no wonder promoters throw in the towel on a weekly basis.

Over the years have you noticed a change in how smaller bands work, in regards to getting shows?

Yes, fuck facebook, use email if any bands are reading this, it makes you look really lazy.

Expect to work your way up the ladder don’t expect to just be thrown a big touring show there’s 100 of bands who were there slaving away before you, be respectful.

How do you make the change from organising DIY shows for your mate’s band to booking the biggest punk bands in the world?

I don’t really think there is much change personally I find the smaller DIY shows more fun since they are so easy to run, I suppose I put on my ‘professional’ head at the bigger shows and won’t start drinking until the 2nd band is on at least.

I think it’s all about preparation if you are organised and disciplined with yourself it’s the same amount of work on the actual show day in the end, just the day might be longer itself with 11am get ins and later load out etc..

If you could book any band, any venue, what would be your dream show?

Ha! Erm, I would rebuild the Astoria in London and totally rip off destruction festival basically with a little added Jawbreaker, Beatsteaks, Hot Water Music in the mix there somewhere.

In reality I still want to work with NOFX that’s the goal and or Bad Religion would cut the cheese.

WTFest is your annual concrete festival, each year the line up has just got more crazy, tell us a bit about how much of an hassle putting it all together must be?

Well it’s just ‘organised chaos’ really you got 35-40 bands in 4 days with 200+ boozy humans everyday from all over coming to celebrate the ‘scene’ it’s a little bit of magic every year.

Usually I start planning it 6 months in advance with headliners then I move further down the bill has time goes on to see who is available.

The ‘ball ache’ part really comes with timing because U.S bands aren’t touring specifically to play WTFEST like they do for FEST or GROEZROCK so I have to be careful as to when I do it and if it clashes with anything else.

Once I’m done with the main bands it’s all pretty easy I make a wish list and take note of who has been doing what over the past year in the UK punk scene and generally give credit where credits due by offering the hard workers the slots.

Obviously there’s so much more that goes into pre planning, tickets, booking, merch, artwork, food, venues, etc etc bla bla I wont bore you with it 😛 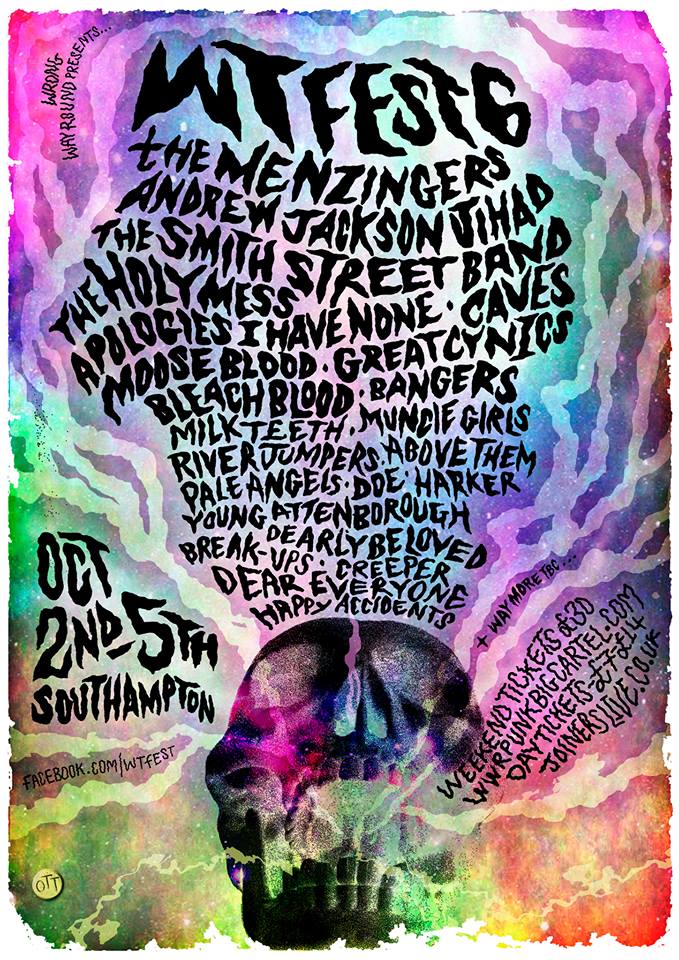 What are some of the moments/highlights that make it all worthwhile?

Dancing with the stars of course, rubbing shoulders with the who’s who of the punk rock celebrity world right!?

No, it’s mostly seeing the people come to a show and having a ‘release’ I think it’s of vital importance to have a place to go to let it all hang out especially in your adolescent years, there has to be someone doing these shows as when I was a kid I had to travel to London for every show pretty much and spend £60+ per show, it was a pain in the ass and wallet.

So providing people with a service so to speak is a cool thing as long as you remain humble and are still having fun it’s a really fulfilling role on a personal level.

Highlights for me are making new friends with the same viewpoints as you and sharing stories and experiences with people from the other side of the world, finding common ground is an excellent thing especially since ‘punk’ shows should really be a place of non conventional thinking.

Just one awesome conversation about music or something you are going through in life with someone at a show or with a band makes it all worth it really and losing your shit to your favourite music of course! 😉

When I started doing this I made a list as mentioned above, when the Lawrence Arms show came along I was done (retired) I had ‘peaked’ so to speak even though that fell to shit mostly.

But regardless it was a huge thing for me but to then go on years later and work with people like The Bouncing Souls, Mad Caddies and watch bands grow from strength to strength like The Flatliners and Gnarwolves, etc its very refreshing for me mentally to see graft pay off sometimes… 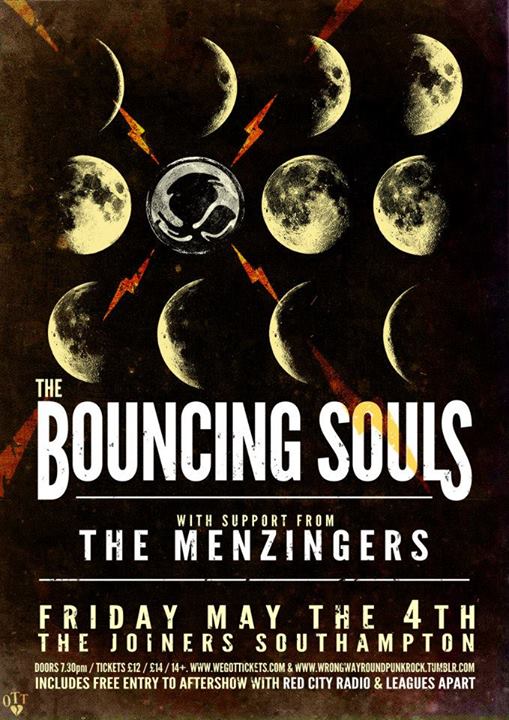 More EMO by the looks of things, I think a few years ago the gruff punk thing was on the rise but the heavy influence on the UK punk scene seems to be the bands from run for cover and no sleep etc at the moment rather than the ‘FEST’ type bands, as a whole it’s probably the most unified I’ve ever seen it and I think it’s important to lean on that and celebrate it while it lasts before shitty metalcore comes back around again.