Alternative rockers Restorations have finally announced details of their highly anticipated third album, to be entitled ‘LP3’. After a month of teasing, the Philadelphia crew are pleased to announce that LP3 will be released on October 27th in the UK, via Side One Dummy Records. The band also revealed the tracklisting and artwork, which you can check out below.

Also released was the first new music from the band in over a year, in the form of new single ‘Seperate Songs’. The new single’s Mitchell Wojacki directed video can be viewed below. 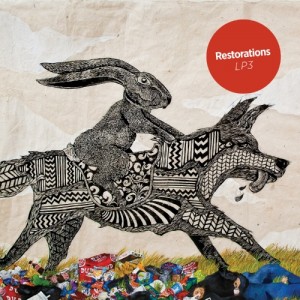 You can pre-order ‘LP3’ on CD or limited clear/black starburst LP here.