Here at Crash Doubt HQ, the summer months tend to be the quietest for us, but we’ve been busy filling up our calendar for the rest of the year in order bring the cream of the crop of UK punk rock and hardcore to you in Lincoln.

First up on October 3rd we have Leeds trio, BRAWLERS. 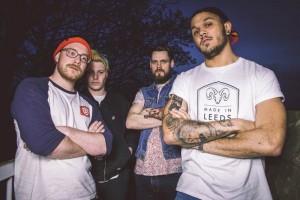 It’s not Brawlers first visit to Lincoln, and some of you might remember they supported Gnarwolves here last November. That night, for lack of a better phrase, they tore everyone a new arsehole. The guys have ties with Lincoln, Harry used to play in bivouac favourites’ Eustacia Vye and they also feature members of Vinyl Collide another old Lincoln group.

Their new venture Brawlers has really been picking up steam and they have already had been picked up by top DJ’s including Huw Stephens as well as touring with JAWS and playing hip festivals like Great Escape, Trucks and Long Division.

Supporting Brawlers will be another Leeds band, Fizzy Blood who feature ex members of Lower Lands. They will also be joined by Less Deceived from Hull and Guts from Lincoln.

Entry for the Brawlers show will be £5 on the door and will kick off at 8.15pm. Below, you can check out Brawlers latest music video taken from their latest EP which has just been released on the highly-rated Leeds based record label, Alcopop!