On the back of their recent EP release via Paper & Plastick and Uncle M and subsequent tour dates (which saw them play shows with Joyce Manor, Cheap Girls, Rob Lynch and Rocky Votolato) Lincoln based indie-punks, Bad Ideas are once again returning to Europe, this time with acoustic guitars in hand. 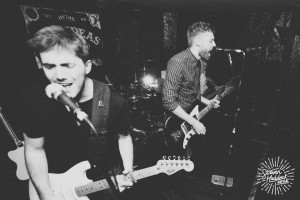 Bad Ideas will appear alongside Norwich folk-punks Ducking Punches and London based act, The Lion & The Wolf for a 3-way acoustic tour visiting Belgium, Holland and Germany.

In further news, Bad Ideas and Ducking Punches have both been added to the line-up for Belgian punk rock festival Groezrock, alongside the likes of Social Distortion, Against Me, Refused and Pennywise after securing large percentages of the public vote.