Alexisonfire’s Return – All It’s Cracked Up To Be?

Alexisonfire’s Return – All It’s Cracked Up To Be?

How many superlatives can I throw around now that Alexisonfire have announced that they are to return this summer for a handful of festival dates? Well, if I’m being honest – all of them. As someone who myself shed a tear whilst attending AOF’s farewells tour, the news that the Canadian quintet are to return filled me with so much intense joy and excitement that I can’t even explain it using words that aren’t just noises, but no matter how jubilant this announcement is, it does present a dilemma of what truly is a ‘Farewell’ tour?

If you aren’t familiar with Alexisonfire or their groundbreaking post-hardcore, then just take a few minutes to acquaint yourself below.

Ever since their conception in 2001 in Ontario, Canada, they post-hardcore crew have been pushing forward in both their genre and themselves. The stark difference between the scrappy anger of debut, ‘Alexisonfire’, the more measured, almost alternative-rock edge to final full-length, ‘Old Crows / Young Cardinals‘, shows just how far a band can travel and change in their lifetime, but the quality of both end of the spectrum clearly demonstrates how uniquely brilliant this band were (are?…). Many fans will argue over what the bands true opus is, however it is widely accepted in mainstream media that third record, ‘Crisis‘, was where Alexis’ 100% nailed their true potential, ‘Watch Out‘ may have a larger punk influence, but it’s Crisis that has the bigger hooks, with tunes such as ‘This Could Be Anywhere In The World‘, ‘We Are The Sound‘, and the sombre ‘Rough Hands‘. The truly amazing thing about Alexisonfire though, is just how much they achieved, and how big they got for a band that plays music so abrasive. A lot of this mainstream appeal was down to the beautiful clean vocals from guitarist Dallas Green – of City And Colour. The blend of Dallas’ soulful crooning, frontman George Petit’s piercing scream, and second guitarist Wade Macneil’s gravely undertones made AOF a thoroughly unique and exciting concept, but that all came to an end in 2011, when through the band’s website, they announced the departure of Green to focus on City And Colour and the departure of Macneil to join an unnamed band (that was later revealed to be UK hardcore bruisers, Gallows). The exit of the pair was deemed too much, and that was to be the end of AOF. The final nail in the coffin was hammered home in late 2012, when then band played what was billed as their ‘Farewell Tour’.

But last week (March 6th), there was suddenly activity from the Canadian’s camp, when they created a new Instagram account and posted an image featuring their ‘heartskull’ logo with the date of the March and the hashtag ‘#AOF2015’ added. Instantly social media was alight, rife with theories about what this meant – was it a new vinyl boxset? Perhaps a live DVD? Potentially a greatest hits collection? And maybe, just maybe, a comeback tour? All was revealed yesterday evening, as the band let slip through their social media accounts that they would be reforming to play a run of shows, including the UK’s prestigious Reading and Leeds festivals. 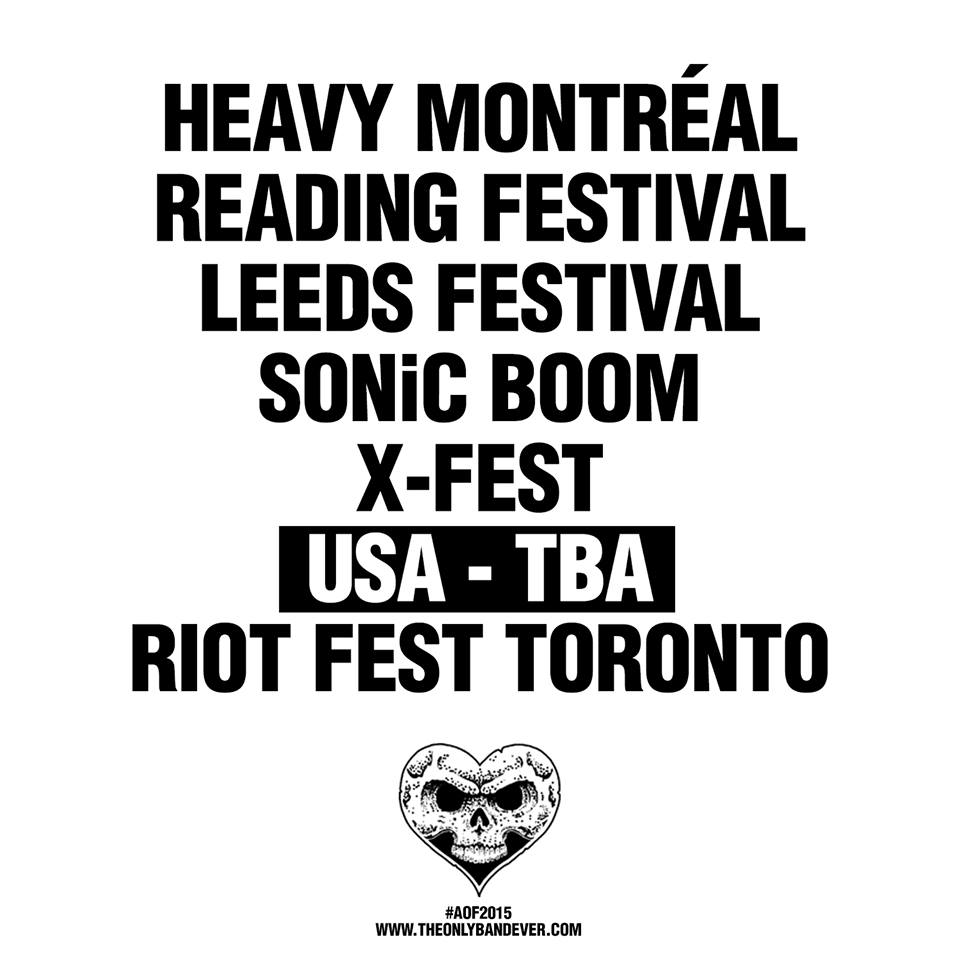 This is, obviously, amazing news – one of post-hardcore’s leading lights have returned. It is currently unknown if they plan to do anything further than these shows, and like many bands that have reformed, their must be a sense of trepidation before releasing anything, especially with an ending so final as 2012’s (the last EP they released was entitled ‘Death Letter‘). This situation does however throw up the question of why now for the AOF boys? Dallas has been busy recently with You + Me (featuring none other than Pink – yes, that Pink), Wade and the rest of Gallows are gearing up to release their fourth full-length, ‘Desolation Sounds‘, George has commitments in Dead Tired, and Jordan Hastings (drums) is currently playing with alternative-rock trio, Say Yes. It could be seen as the Canadian luminaries are on a take the money and run style reunion, especially since they have completed a ‘farewell’ tour, although a reunion was never ruled out of the question by the band themselves. The proof will be, as they say, in the pudding, and that metaphorical pudding will be taking the mainstage and Reading and Leeds this summer (Reading Saturday / Leeds Sunday) for us all to find out. It could be an all out triumph, with the band retaking their rightful place at the top of the melodic hardcore pile, and yet it could be a shambles with no one really wanting to be part of proceedings over the summer.

One issue called in to question by these circumstances is the idea of a ‘farewell’ tour. A true farewell tour should be the end of a band, that they will never perform live again after this tour, one last chance for fans to join the band before they end. But Alexisonfire have completed a farewell tour, the two European dates performed were two nights at Brixton academy in early December 2012. Alleged reports from the time indicated that over 20,000 tickets could’ve been shifted for those two shows alone, a startling figure for sure, but now that they’re back will certain fans feel vitriol towards the Ontario five-piece? Fans from mainland Europe had to book travel and accomodation on top of gig tickets, not a light expense to shell out, but a cost some would pay if it truly was to be the final time they were able to see their idols. It seems slightly dishonest for the band to go back on their ‘farewell’ decleration, yet it’s almost a career plan now for bands to get to a certain size, break up, and then come back a few years later, bigger than they ever were. However it could genuinely be a case that Alexisonfire really did belive that those December 2012 shows would be their last, and now they want to get back out there, and let’s be honest here – a world with Alexisonfire is infintely better than a world without.

I for one will be right there at Reading, watching, singing, moshing, jumping, etc., and I am very excited to see where this leads, but you must be cautious – not everything is as perfect as it is on paper. 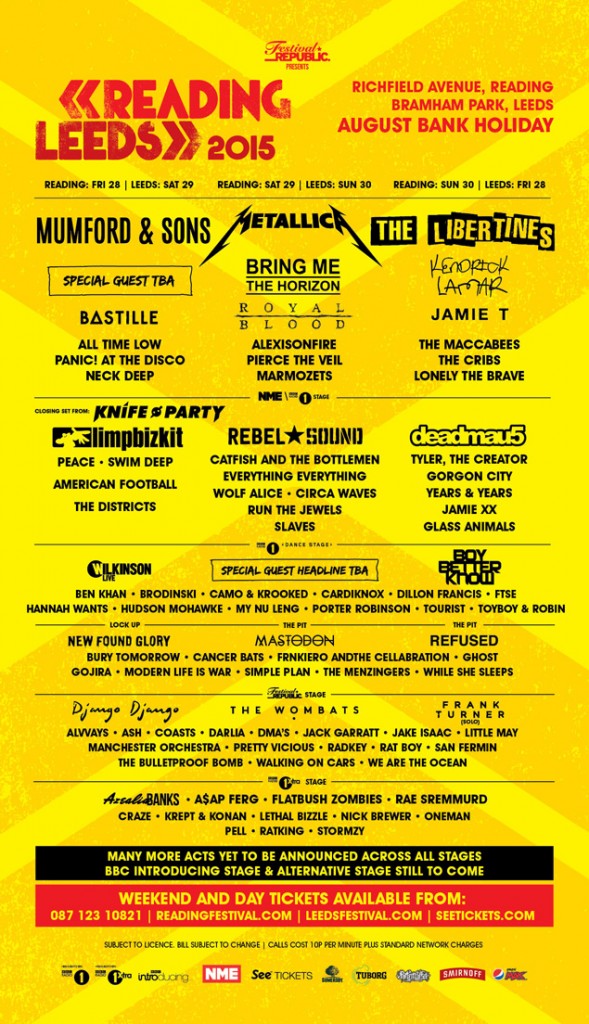