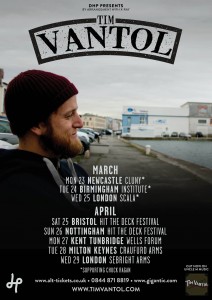 Together with London’s Skinny Lister, Tim will be joining Chuck Ragan for three UK dates this March before returning once again in April for a run of shows which includes Hit The Deck Festival.

We’ve had Tim in Lincoln several times playing everywhere from Kind Bar, to Crash Doubt fest and even in Kirsty Whaler’s garage in the time that we’ve known him. However, In the past couple of years things have really begun to take off for Tim and it couldn’t happen to a nicer guy.

His latest record “If We Go Down, We Will Go Together” is set to be released in the UK via heavyweight German indie label, Uncle M, which also happens to be their first physical UK release.

For more info on Tim Vantol click here or visit Alt-Tickets to purchase your tickets for Tim Vantol, Skinny Lister and Chuck Ragan in Newcastle, Birmingham or London.