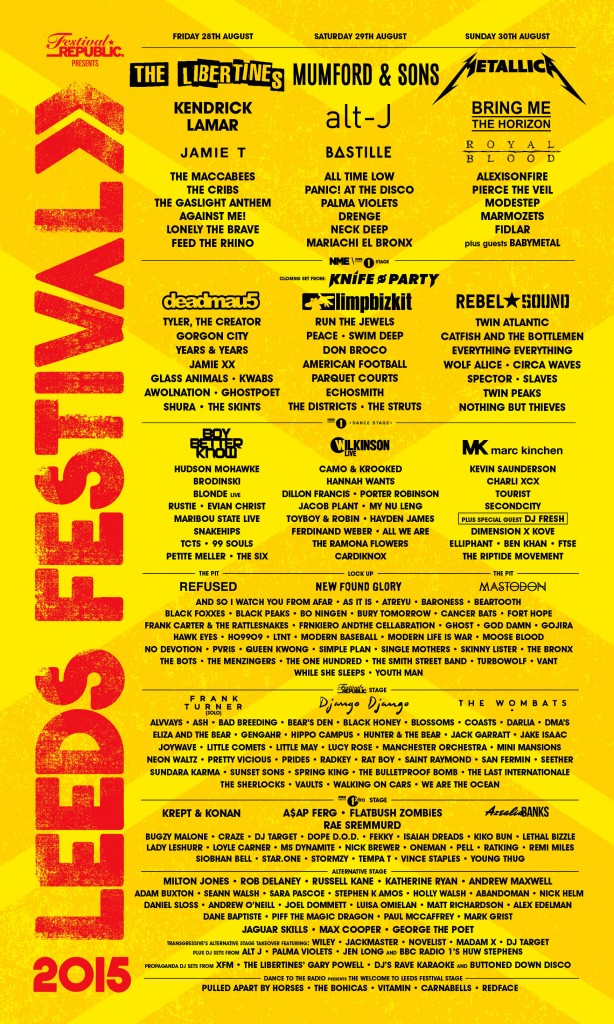 Reading and Leeds is over a month down the line from now. The announcements have been made and stages couldn’t look stronger!

As with all festivals, deciding who you should stick it out for is difficult. It’s a diverse festival for music – if you’re going or even thinking about it, let us make it easy for you with some suggestions! There’s more to it than just staying at the Main Stage all day – there are plenty of corkers and hidden gems you can’t afford to miss out on, hardcore, rock and alternative wise!

Before we get stuck into it, first off, we recommend you make good use of the NME/BBC Radio 1 Stage, the Lock Up Stage and The Pit! You’ll find a whole host of bands flying the flag for the heavy and alt-rock genre, unsigned, just breaking through or well-known! It’s also a clever idea to introduce yourself to a new band every once in a while rather than running around trying to see everyone you want to and these stages offer that opportunity. Here’s our lucky seven!

If you fancy getting away from all the mainstream noise, this band is a great choice for something a little different to get your ears round. Hailing from Illinois and Colorado, USA, the band have recently reunited fourteen years since they decided to stop recording together. They are touring their self-titled full-length album, which is full to the brim with repetitive, melodic and overlapping guitar lines and soft vocals; all very easy to listen to. The three-piece will perform on the NME/BBC Radio 1 Stage and will be doing a warm-up show before the festival begins if you fancy seeing them in an intimate venue, playing the Brooklyn Bowl in London on August 27th.

An artist not to be missed if you’re thinking about checking out the NME/BBC Radio 1 Stage! Slaves offer an exciting state-of-the-nation punk sound that gets adrenaline pumping in seconds. The two-piece released their debut album last month, Are You Satisfied?, which reached number eight in its first week on the Official Albums Chart. Two years ago, the band performed on the BBC Introducing Stage for Reading and Leeds – they’ve come very far in such a short space of time! One of 2015’s biggest breakthrough acts, if you’re up for getting involved and are all for raw energy, you know where you need to be!

For those of you looking for a rockier and rather different band who will deliver you a set to remember, Turbowolf are your unit. Performing on The Pit Stage, psychedelic and infectious tracks from the band’s second full-length release, Two Hands, will dominate their running order. Having fun is key to their performances; with earworm songs full of colossal riffs and plenty of moments for a sing-along, we guarantee you’ll be shown a great time. Something out of the ordinary can really make a festival, so don’t shy out of giving this group a try and getting down to their funk!

Brighton’s Black Peaks have a busy summer ahead of them, playing all the major UK festivals including Nass, 2000 Trees and Y Not. Having watched their extremely passionate and exciting performance at Hit The Deck Festival earlier this year, this band deserves to be topping your must-see list for Reading and Leeds. Their two latest singles, ‘Crooks’ and ‘Glass Built Castles’, offer a noise that’s intense, clever and really makes a mark. If you’re looking for something to impress, make your way down to The Pit before it’s stage time for them. Having supported Arcane Roots on their UK leg earlier this year, they’re sure to be one of the big talking points of the weekend.

How about something that’s light-hearted, carefree and fun? Modern Baseball, performing on the Lock Up Stage over the course of the weekend, deliver all three. Based in Brunswick and Frederick in Maryland, USA, the band formed in high school and went on to reach No. 97 on the US Billboard 200 with their second studio album, You’re Gonna Miss It All. If dosing up on your indie-pop and pop-punk is essential, reserving some time to see their performance is absolutely necessary.

There’ll come a point where you’ll just want to be angry and go for it. Frank Carter & The Rattlesnakes speak a language which is gritty, furious and ticked off. With this act, Reading and Leeds are providing you with the very best chance to get your blood boiling. It’ll be the first time the band perform brand new material at a festival from their debut album, Blossom, out August 14th via Kobalt Music and their own independent label, International Death Cult. So, expect something very special and explosive!

Overall, who is the one to watch out for? PVRIS is. The trio from Massachusetts, USA, have been receiving support from BBC Radio 1, who brought them in for Live Lounge and Maida Vale Sessions, and Yahoo Screen, with an exclusive live stream of their set whilst on the Vans Warped Tour! Their debut album, White Noise, is packed with emotion-filled and hard hitting performances; tracks which are destined to last the test of time. It won’t be long until they’ll be headlining festivals and playing halftime shows at the Superbowl! See them on the Pit Stage across the weekend!

Won you over? You can purchase weekend and day tickets here.