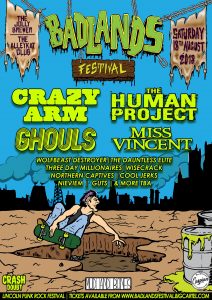 Saturday 18th August will see the newly formed BADLANDS FESTIVAL coming to Lincoln in an effort to celebrate the best of the UK’s diverse punk rock and hardcore circuit.

Early-bird tickets sold-out in just a couple of weeks, however a limited number of  general tickets have now gone on sale and are available here: https://badlandsfestival.bigcartel.com

Promoters Mud & Bones are teaming up with Crash Doubt.co.uk to present an all day festival taking place outdoors at The Jolly Brewer (Broadgate) until 10pm and an after party with bands and DJ’s at The Alleykat Club (Lower Butchery Court) until 2AM.

An impressive lineup has already begun to take shape with Plymouth punks and Xtra-Mile recordings band Crazy Arm leading the lineup, together with Leeds skate-punk group The Human Project, London punks Ghouls, and Miss Vincent from Southampton who are due out on tour with Creeper later this year.

A second wave of artists including Boston hardcore punk band Wolfbeast Destroyer, Three Day Millionaires (featuring ex-members of The Freaks Union and The Living Daylights), and local polish-punk band Nieviem have been announced.  A further run of artists have also been added last week including The Dauntless Elite, Wisecrack, Northern Captives, Cool Jerks and Guts.

Commenting on the festival, promoter Lee Byrne said: “Lincoln has always had a great alternative music scene and a strong punk rock scene in particular, but in the past few years it’s become much more fragmented. We’re aiming to put together a festival that caters for everyone into punk music – from skate punk and crust punk to indie punk and power pop”.

Check out some of the bands announced so far below…